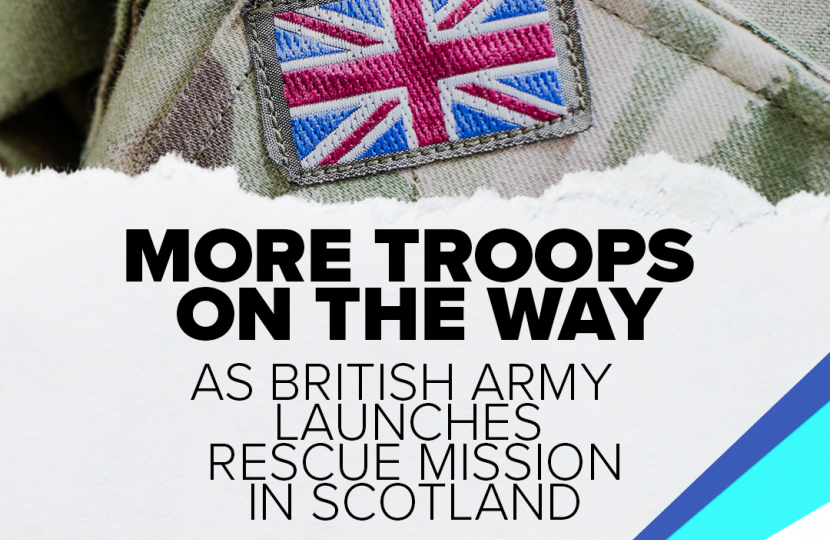 In recent weeks, reports of people in Scotland waiting upwards of 16 hours for ambulances have shocked the whole country with First minister Nicola Sturgeon finally admitting that the NHS was in crisis after they record numbers were waiting more than four hours in A&Es.

Now, in a humiliating admission of their failure to prepare or deal with the crisis, the SNP have been forced to call on the British Army for assistance.

Over 100 are soldiers driving ambulances with a further 111 operating the COVID-19 testing units that the military also previously helped run during the height of the pandemic last year.

The Ministry of Defence said its staff, including members of The Royal Highland Fusiliers, were expected to be deployed for the next couple of months.

In Banff and Buchan, health coverage is spread desperately thin after chronic underfunding and a lack of commitment from the SNP Government.

“I welcome British troops coming to save the day from the SNP’s abject failure to run the NHS effectively in Scotland over the last 15 years. I only wish it wasn’t necessary.

“My constituents are only too aware of the problems in Scottish healthcare, with residents telling me about long waits, inability to get appointments and local services cut to the bone.

“I have regular discussions with local health provider agencies – including the Scottish Ambulance Service – and the root cause always appears to be lack of funding and support from the Scottish Government – particularly for rural North East Scotland.

“After SNP MPs voted against £1.1 billion a year extra funding for Scotland’s NHS by the UK Treasury, it seems they are willing to continue to let Scottish public services suffer in the name of grievance.”