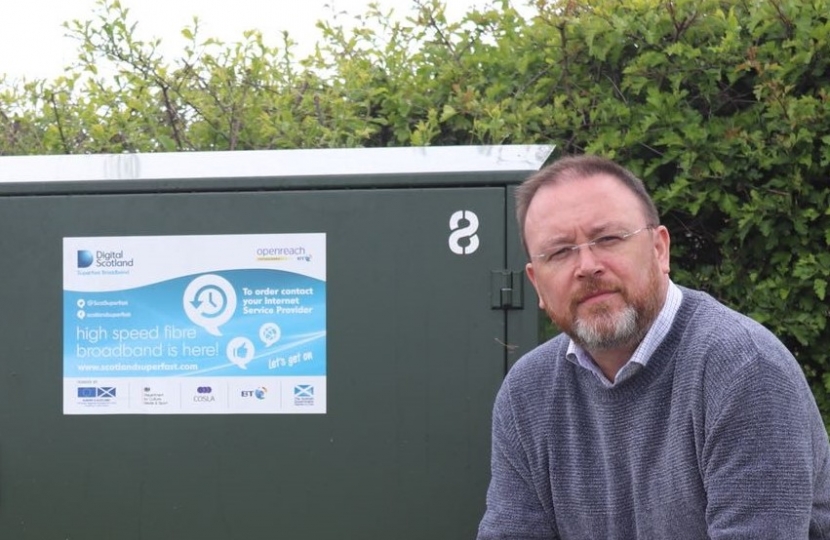 Banff and Buchan MP David Duguid has said he hopes that a “long overdue” contract to deliver broadband to the north of Scotland can connect those in rural communities as quickly as possible.

The Scottish Conservative MP welcomed an announcement from the Scottish Government that it has signed a £384million deal with BT to progress work on the Reaching 100 programme.

Work is due to start in the New Year to bring superfast broadband to all rural, remote and island communities in the north of the country.

“This contract agreement is long overdue as the SNP government had previously promised that all of Scotland would have superfast broadband by 2021.

“Clearly that deadline will not be met, but it is encouraging to see some progress is being made.

“It is important to point out that this work will not just apply to island communities in Scotland but also to parts of the north-east such as Banff and Buchan.

“The most recent figures I have seen showed that one in ten premises in Banff and Buchan was still unable to receive the most basic broadband speed, let alone superfast.

“I know there are pockets of my constituency where speeds are very slow indeed so I welcome the fact that this work is starting and I hope that communities can be connected as quickly as possible.

“In the meantime, I will continue to work with UK Government Ministers to ensure Scotland will benefit from UK-wide plans for providing superfast broadband.  We have missed out on these in the past due to Scottish Government’s overstated R100 delivery ambitions, which weren’t met.”