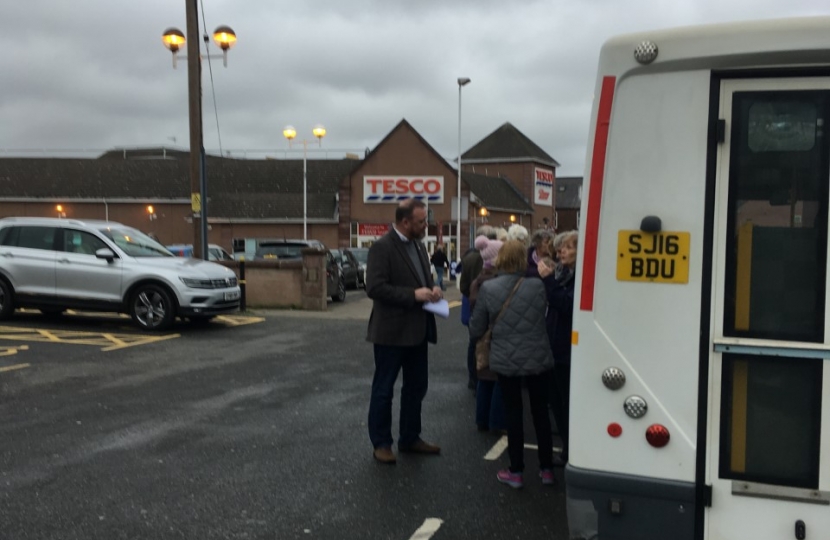 I want to start this week’s column with a word of thanks to all of those who came to the session in the Tesco car park last week to discuss the future of the Dial-A-Bus service in Turriff.

As reported in the Advertiser last week, there are concerns among users about the new system that comes into force on November 19.

I hope that the information event was helpful to those who attended, However, I am conscious that many people will not have been able to attend, and I want to make sure that all users have access to the information they need.

The new Turriff town and circular service will remain free and will operate on an on-demand basis.

Passengers can pre-book journeys by phone or email, up to one week in advance, or two weeks if it is for a medical appointment.

Those using the service should book no later than the day before travel, but ‘same day’ bookings may be available. Timetables can be picked up from Turriff Library, Towie House or the Post Office.

I plan to monitor progress closely. The biggest challenge is getting the word out to everybody that this service is not stopping, just changing.

I would encourage anyone who has the information to pass it on to friends and family so nobody misses out.

I am told by local councillors that another meeting is planned for Turriff residents. This is something I specifically requested of Aberdeenshire Council.

I have also asked that the Formartine Area Bus Forum, which alternates between Ellon and Oldmeldrum, also be held in Turriff to make sure that people from this area are not left out.

I also spent an enjoyable afternoon during the brief Westminster recess last week at Aden Country Park, where I planted trees as part of the Queen’s Commonwealth Canopy project.

More than 500 MPs are taking part in the conservation initiative to mark Her Majesty’s lifetime of service.

The five trees that I planted will be in the Aden Park arboretum for the time being, as there is an archaeological dig ongoing. Once the dig is complete, the trees will be moved to a different location.

The trees – two silver birch, two rowan and a hazel – were donated by the Woodland Trust, Sainsbury’s and ITV, which screened the documentary, The Queen's Green Planet, in April.

The ambitious legacy project brings together Her Majesty’s deeply-held commitment to the Commonwealth and her little-known love of trees. I was more than happy to take part.

Finally, I had the pleasure of attending the Remembrance Concert at Turriff Academy last Friday.

It was a very enjoyable and suitably respectful concert, remembering those from this area who fell in the Great War and conflicts ever since.

This was one of several events taking place across my constituency to mark the centenary of the Armistice. It was great to see so many people turn out to pay their respects and remember those who made the ultimate sacrifice.