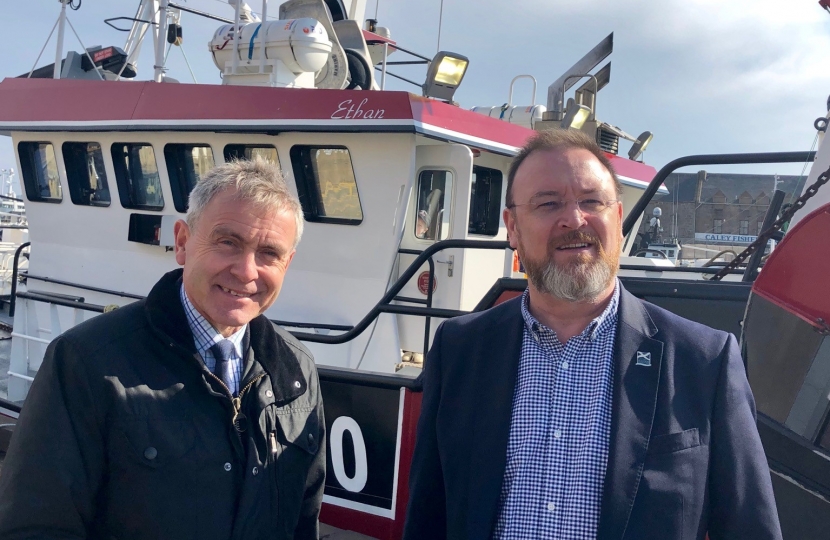 Last week in Westminster, I was pleased to welcome Robert Goodwill MP, the new Fisheries Minister for Agriculture, Fisheries and food to his role. One of his first official duties was respond to the Agriculture and Fisheries debates in which I spoke.

Mr Goodwill has also accepted my invitation to visit Banff and Buchan next month.

The agriculture debate heard that our farmers have always seen the EU’s Common Agricultural Policy as a ‘one-size-fits-none’ approach, from which they are keen to leave.

Farmers are looking to both of Scotland's governments to work together to create a system more tailored to our sector and our environment.

The UK Agriculture Bill is aimed at rewarding farmers for “public goods”, such as good environmental stewardship, while continuing to encourage producing high-quality food in more innovative, efficient and sustainable ways.

The omission of a schedule in the UK Bill, specifically for Scottish farmers, has left Scottish farmers in the dark. Unlike the Welsh Assembly and Northern Ireland Department, the SNP Scottish Government has so far refused to request a similar schedule.  As we heard in the Scottish Affairs Committee on Tuesday this week, this intransigence by the SNP is only adding to the uncertainty in the industry.

It won’t have gone unnoticed that there were a series of crucial Brexit votes last week.  Despite the motion of leaving on 29 March with a deal failing to pass again, I continue to believe that all parties must come together to get such a deal through parliament.

Although there appears to be a majority in the House who are against leaving on 29 March without a deal, a majority did vote against the amendment calling for a second EU referendum.

Those who continue to frustrate the Government’s attempt at an orderly Brexit, are only adding to the uncertainty of people and businesses.

We need to respect the result of the 2016 referendum while avoiding the chaos which the SNP and other opposition parties are actively driving us towards.

The motion which was proposed last week, was the same deal I supported back in January, supplemented by additional legally binding assurances that would reduce the risk and impact of the so-called Northern Ireland backstop.

I have been encouraging colleagues, including in my own party, to back this deal in order to avoid further delays and uncertainty or even, “no-Brexit”.

Some senior SNP figures are also asking their MPs to back the Brexit deal.

SNP veterans, Alex Neil and Jim Sillars, said that the Prime Minister’s deal is the only thing that ensures the UK will leave the EU.

In a joint letter, they claimed they were among many SNP Leave supporters whose views have not been represented by the party.

It’s clear that even members of Sturgeon’s own party are tired of her antics on Brexit.

In other news, it was an honour to be invited to speak at the Conservative Women's Scottish Council AGM and afternoon tea at the Dalmahoy Hotel near Edinburgh.

I was asked about my work in Parliament to help raise awareness and seek improved diagnosis and treatment for 22q11 Syndrome – a chromosomal disorder which is thought to be more common than Down’s Syndrome but often goes undiagnosed.

The Council and the Conservative Women’s Organisation have been supporting and encouraging female participation at all levels of politics for over 100 years.