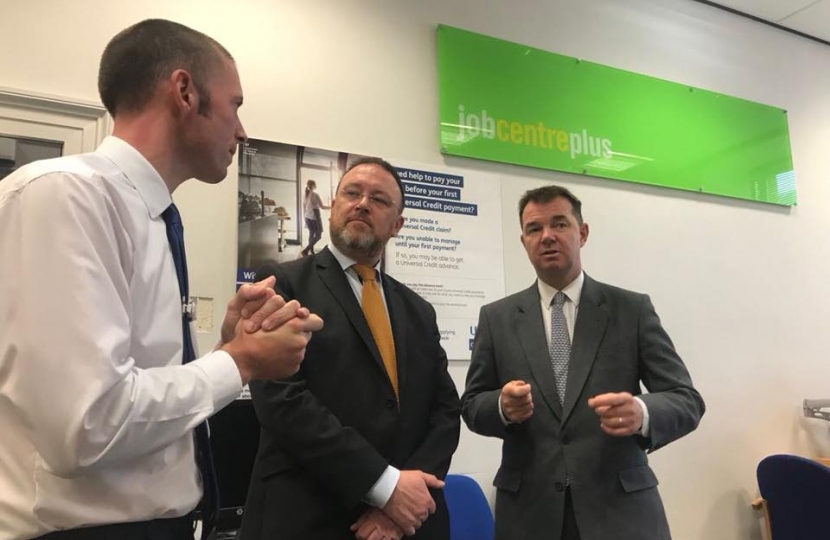 I was pleased to welcome another UK Government Minister to the constituency recently.  Guy Opperman, Minister in the Department of Work and Pensions, visited the Job Centre in Banff to see  for himself how the area was adjusting to Universal Credit which had been introduced here in June.

Universal Credit is the biggest change to our welfare system in a generation and was designed with three aims - to get more people into work;  to protect the most vulnerable in society;  and to be fair to those (the tax payer) paying for it. The legacy benefits system, inherited from the Labour Government saw an increase in welfare spending from £18 billion in 2003 to £30 billion in 2010. This was quite simply unsustainable.

I am not denying that there have  been problems with  the implementation of Universal Credit  particularly around payment cycles. However the phased rollout was planned so that the system could be kept under review and issues could be addressed along the way.

When fully rolled out, Universal Credit will help an extra 200,000 people into work and, due to the more simplified system, an estimated 700,000 will gain an average of £285 per month from unclaimed benefits to which they were entitled. Most importantly, 1,000,000 households with a disabled member will be getting, on average, £110 more per month.

application process and, significantly, 83% of Universal Credit claimants across the UK are reported to be more satisfied with the new arrangements compared to the previous multi-faceted benefits system.

Clearly, those experiencing difficulty should be given help. I would therefore encourage any claimant who is experiencing problems with Universal Credit to approach Job Centre staff in the first instance.  Citizen’s Advice Scotland is another excellent and knowledgeable source of support.  It is in recognition of the valuable service they provide that the UK Government has recently announced a new, formalised partnership (worth £51 million) between Job Centres and the Citizen’s Advice Bureau.  Constituents can also contact me on david.duguid.mp@parliament.uk  If they require further help.

On a completely different matter, a new Doric Festival called, ‘Across the Grain’, is now underway.  Organised by the Arts and Heritage Department of Aberdeenshire Council, local communities have been involved in a wide range of events across the North East.

Our Doric culture is far more than just about a different dialect.  Songs, poetry and drama make up a large part of the entertainment  – but there are also many art installations and presentations of some of the unique aspects of life here in the North East.

There are many references to life, past and present, in traditional industries of fishing and farming and there are also Doric twists on other cultural sources, such as the translated songs from Handel’s ‘Messiah’.

One particularly entertaining part of the festival has been the ‘Call my Bluff’ competition – testing local residents’ knowledge of some of the more obscure Doric words and phrases.

I look forward to more festivals such as this one to help encourage arts and heritage projects across Banff and Buchan.

For more details on what is left to experience from ‘Across the Grain’, look up @creativeaberdeenshire on Facebook