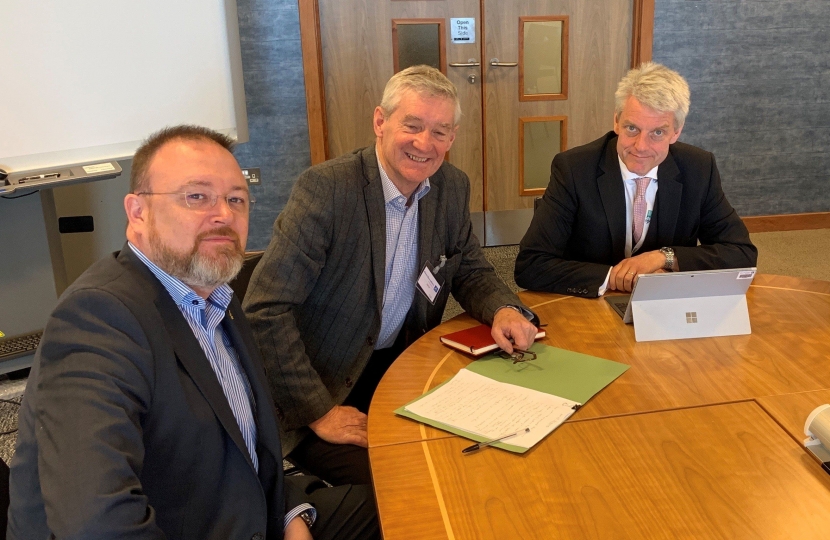 There has been a lot of coverage in recent weeks about the future of minor injury units here in Banff and in Turriff.

Understandably, there has been concern about any suggestion of a downgrade in services provided locally.

I wanted to raise the concerns raised by my constituents directly with the head of the Aberdeenshire Health and Social Care Partnership (AHSCP).

Last week, I met the chief officer of the AHSCP, Adam Coldwells, along with my Scottish Conservative MSP colleague, Peter Chapman.

The meeting followed a public event on future options for the unit at Chalmers Hospital that was attended by hundreds of people.

Those handling the consultation should have been in no doubt as to the strength of feeling locally.

I think it was very clear that people do not want to see any downgrading of local health services.

In fact, figures obtained via a Freedom of Information request by the Scottish Conservatives found that both the Banff and Turriff units are very well used.

A preferred option for Turriff is still to be outlined for the Integrated Joint Board, but the proposal for Banff is to reduce hours to daytime only from 8am to 6pm.

The message from the partnership was that they want to minimise any reduction in service, and are keen to raise awareness among the public about which facilities to use for different levels of injury.

I will be following up the meeting with a letter and I plan to update my constituents including readers of the Banffshire Journal as soon as possible.

On another topic, I was delighted to attend the Skipper Expo at the Aberdeen Exhibition and Conference Centre last weekend.

Now in its ninth year, this fishing industry event attracted more than 200 exhibitors from all over the world.

It was a fantastic showpiece for our growing fisheries sector here in Scotland, and provided a great opportunity for those in the sector to network and conduct business.

It was great as always to see the huge volume of fresh fish landed in the north-east – with those at the market informing us that £200million of produce passed through in the last year.

Ports across the Banff and Buchan coast – including in Macduff – are all investing in infrastructure that will help to grow our local economy and create more jobs. That can only be a good thing.

On a final note, I attended the opening of the Aberchirder Men’s Shed last week.

There has been a steady rise in the number of Men’s Shed projects in recent years.

The idea is to provide a place where men (and some women) can pursue practical interests.

It provides a social connection for people who may otherwise have worked in isolation, and builds friendships and a sense of community.

I have been following the Aberchirder project since the beginning and was really impressed with the progress they have made.

I understand a similar initiative in Banff has also secured premises.

In an age where the world moves very fast, it is welcome to see something that brings people together in a positive and constructive way.

This Volunteers Week, I would like to thank every person and group who routinely volunteers around Banff and Buchan.

Of course, this year has been different.