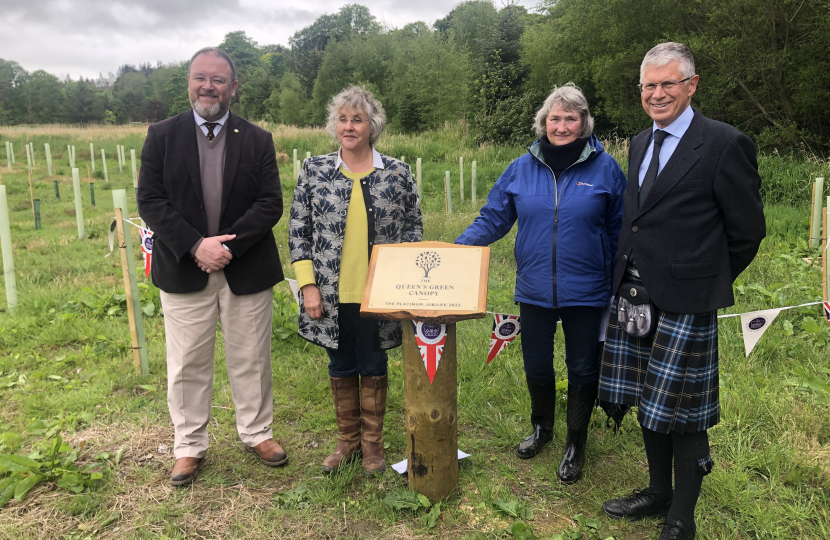 I am very happy to see that Turriff is making the most of the Platinum Jubilee celebrations, and the town is looking fantastic.

Official Jubilee celebrations will launch with the lighting of a beacon on 2 June.

Similar with beacons are being lit right across the United Kingdom at the same time, in celebration of The Queen.

Prior to the more formal events happening this week, I was delighted to take part in a couple of events last weekend.

The first was a ceremony on the banks of the River Deveron a few miles north of Turriff, commemorating the planting of almost 2,000 trees as part of the Queen’s Green Canopy.

Alvah and Forglen Community Council put in a huge amount of work supporting this scheme and were allocated 2.8 acres of land by the Mountblairy Estate to establish a wild wood,which will help the environment, as well as enhancing the landscape and habitat of local wildlife.

It was my genuine pleasure to help plant some of those trees back in March and it was great to return to the site last weekend, see the trees thriving and to say a few words introducing Lord Lieutenant for Banffshire, Andrew Simpson, who read out a message from The Queen.

I quoted what I believe is an ancient Greek proverb: “A society grows great when old men plant trees under who’s shade they will never sit.”

I was therefore glad my young children were with me to enjoy the event and will be able to return for many years in the future to enjoy the feature.

Everyone who attended were well fed and suitably entertained by the Turriff Silver Band.

The second of last week’s events in honour of Her Majesty was the Thanksgiving Service at St Ninians and Forglen Church, organised by the Church of Scotland Buchan Presbytery.

It was a beautiful service, which included readings of quotes from The Queen, as well as choir performances of some of Her Majesty’s favourite hymns.

Amongst all of these celebrations of course, the cost of living continues to rise, and families are feeling the squeeze of global inflation – particularly on energy.

So I welcome the announcement last week, by Chancellor Rishi Sunak, of a further £15 billion of UK Government support to help people with these costs.

The lowest-income households – roughly a third – on means-tested benefits will receive a£650 one-off payment and £150 from the council tax rebate, on top of the £400 energy grant– totalling £1,200.

Much has been said about the new temporary levy on energy profits.

This is a far more sensible and focused approach than the so-called windfall tax proposed by Labour and supported by the SNP, which would have merely been a blunt ‘smash-and-grab’ instrument, aimed at merely punishing the oil and gas sector.

The UK Government’s approach raises more funds and pays out more than any of the opposition’s punitive measures, but also attracts new investment in the North Sea, with a 91% tax relief on investments.